A Journey Of Strength: Stand Tall This World Spine Day 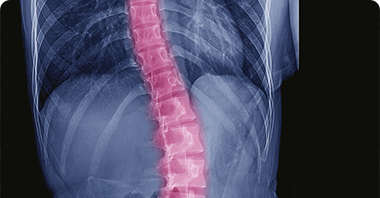 What if you had a spine deformity so severe that you couldn’t walk? Does it seem like a hopeless situation? It doesn’t have to be. Sakra Premium Clinic is a pioneer in spinal care and surgery and we pride ourselves on our high success rates and the positive change we bring to the lives of our patients.

Here is an inspiring story from one of our patients who came to us with a severely deformed spine that left him immobile, in pain, and depressed. Thanks to our expert doctors, he walked away taller and stronger than ever.

The patient presented with a history of hereditary motor neuropathy with resulting rigid kyphoscoliosis. He complained of breathlessness, difficulty walking, and feelings of depression due to his condition. His back was visibly crooked with a hunchback. The spine displayed gross deformity with kypothic degree of 75 and scoliotic degree of 70.

The patient was advised to undergo kyphoscoliotic correction surgery to reverse the deformity and improve overall functionality and quality of life. The surgery was undertaken by a team of spine surgeons which included Dr. Satish Rudrappa, Dr. Ramachandran, and Dr. Ramakrishna.

Dr. Satish Rudrappa was the head surgeon. The surgery was conducted in 8 hours and was a complete success.

Post-surgery, the patient had a rapid recovery. He began walking the day after surgery and his height had increased by 7 cms. He underwent rehabilitative treatment and was discharged in 5 days with full mobility.

The onset of hereditary motor neuropathy is usually during childhood or adolescence with rapidly progressive weakness and wasting of the large muscles of the legs. As the disorder progresses, the muscles of the arms and hands can also be affected. In some sub-types of hereditary motor neuropathies, the symptoms start in the feet instead of the legs.

Spinal deformities are reported in some patients with hereditary motor neuropathy such as scoliosis, kyphosis, or kyphoscoliosis. The normal spine has a natural curvature and three segments. The cervical section (neck) and the lower back curvature are ‘c-shaped’ and called lordosis. The portion of the spinal cord in the chest (thoracic spine) is ‘reverse c-shaped’ and is called kyphosis.

The natural curve of the spine is important for balance, stability, and mobility of the body. Any abnormal or excessive angles of curvature can affect these normal functions.

What You Need To Know About Kyphoscoliosis

Kyphoscoliosis can result due to a number of factors such as genetics, poor posture, certain infections, etc. This condition is not merely a spine deformity but also has a number of associated complications such as difficulty breathing, pulmonary hypertension, difficulty performing everyday tasks, and psychological problems such as anxiety and depression.

Treatment for kyphoscoliosis can include physical therapy, medication, surgery, or any combination of these.

Minor cases of this spine deformity can be corrected with exercise and physical therapy, along with medications if required. Placement of back braces can also be used to return the spine to a normal curvature.

Severe or progressive cases of kyphoscoliosis may not be completely corrected by non-invasive treatments and so corrective surgery may be needed.

Why Is Kyphoscoliosis Correction Surgery Difficult?

Surgery for kyphoscoliosis aims to correct the deformity, correct any nerve damage, and prevent further progression of the deformity.

The surgical procedure is a spinal fusion surgery with instrumentation. During the surgery, the area of the spine that needs to be corrected is exposed via a long incision. 2-inch titanium screws are placed into hard struts of bone called pedicles which are on either side of the vertebra. Once all the screws are in place, the surgical team corrects the angle of curvature.

While the success rates of this corrective surgery are overwhelmingly positive, there are certain risks that need to be considered. Risk factors can include nerve damage leading to permanent paralysis, failure to correct the deformity, excessive bleeding, and infections.

The risk of paraplegia or complete paralysis can be the most troubling for many patients. However, this should not be a reason to delay or refuse surgery if it is required.

As with any other surgical procedure, it is important to analyse the risks and benefits. Hospital infrastructure, the presence of an experienced and expert multidisciplinary team, and the technique of the surgery are important factors that can improve chances of success for patients undergoing corrective surgery