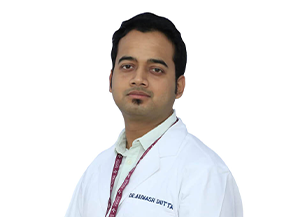 Dr. Abinash Dutta completed his MBBS from Gauhati Medical College, Guwahati, Assam in 2009. Thereafter he got selected for M.S. GeneralSsurgery in Assam Medical College , Dibrugarh, Assam in 2010 in first attempt after completing 7 months of compulsory rural posting. He passed out in 2013. Following this he served 11 months of compulsory state service in Jorhat Medical College in the capacity of senior resident. He then got through M.Ch. Neurosurgery in Gauhati Medical College in his first attempt in June, 2014 and passed out in August, 2017. Following this he worked as consultant neurosurgeon in Nazareth Hospital, Shillong, Meghalaya from September, 2017 to February, 2019. During his tenure as consultant neurosurgeon in Nazareth Hospital, he also worked intermittently in NEIGRIHMS, Shillong in the department of neurosurgery.

Awarded gold medal by Indian academy of paediatrics for securing highest marks in paediatrics in final MBBS examination in 2008.

Special interest in vascular and skull base neurosurgery