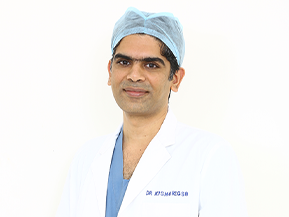 Dr. Kishore GSB is dedicated towards providing services of the highest standard to patients who are in need of liver surgery or liver transplantation. Before joining Sakra World Hospital, he was Associate Professor of Liver Transplantation at the Institute of Liver and Biliary Sciences, New Delhi. During the four and a half years as consultant there, he was a member of the core team that performed over 300 liver transplantations with success rates at par with the best centers in the world. He has significant expertise in living donor hepatectomy and has international publications in this area. He has also led liver retrieval teams at various cities of India for deceased donor liver transplantation.

He has a very strong foundation in liver surgery and was conferred a Master’s Degree in Hepato-Pancreato-Biliary Surgery from the Henri Bismuth Institute, Paris. He has been a visiting fellow to high-volume centers of excellence across the globe. Over a period of one year (2010-2011), he was affiliated with the Liver Surgery/Liver Transplantation Units at MD Anderson Cancer Center, Houston, Texas, USA; St James’ Teaching Hospital, Leeds, UK and Asan Medical Center, Seoul, Korea. He completed his advanced training in Surgical Gastroenterology from the Post Graduate Institute of Medical Education and Research, Chandigarh in 2009. He completed his general surgery training from St Johns Medical College and Hospital, Bangalore. He graduated from the same college with gold medals and distinctions.