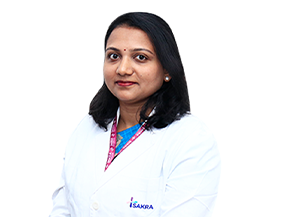 Dr Shilpa Kava, is a Gynaecologist and Obstetrician, with over 10 years of experience in the field. She has been working in Dept of OBG, Sakra World Hospital since May 2016 and has contributed to the growth and functioning of the department by setting up protocols for patient safety. She believes in team work, multidisciplinary care and evidence-based practice.

Dr Shilpa Kava has been a meritorious student throughout and has completed her MBBS in 2008 from Kasturba Medical College, Mangaluru, followed by MS, OBG in 2012 from the prestigious University College of Medical Sciences (Delhi University) through All India Entrance examination.
In addition she has completed Post Graduate Diploma in Medical Law and Ethics from the renowned National Law School Of India University, Bengaluru.